View Profile
After a long hiatus, Bollycurry is back with Couple of the Week!

In the spotlight, we have the beautiful couple of Riteish Deshmukh and Genelia D'Souza! 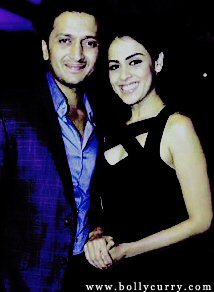 Riteish started his Bollywood career with Tujhe Meri Kasam. However, the lad gained fame and success after his film Masti. Deshmukh is mainly known for his superb comic performances in films such as Kya Kool Hai Hum, Malamaal Weekly, and Apna Sapna Money Money.
Other than that, Riteish also appeared in a supporting role in Ram Gopal Das Verma's Bluffmaster! alongside Abhishek Bachchan.
Very soon, he will be seen opposite his real lady love Genelia in Tere Naal Love Ho Gaya.

Genelia's debut was alongside Ritesh in Tujhe Meri Kasam and then, the duo were seen together again in Masti. Since she did not gain much standing in B-town, the gal moved on to doing only Telugu films and did not return to Bollywood till 2008. Her bubbly character, Aditi, of Jaane Tu Ya Jaane Na opposite Imran Khan won many hearts and her a permanent place among the Bollywood elite!

This adorable couple, like many other B-Town couples, has decided to settle down together!

The marriage is believed to be in February 2012! We await the day the two tie the knot and wish them the best of
luck!
Concept: Shini
Editor: Gunia Graphics: Zunni