View Profile
When Nikita Anand was told she's going to be starring in Nileish Malhotra's 'Monopoly' opposite none other than yesteryears' glam queen Zeenat Aman, she couldn't help but feel nervous.

But the two hit it off almost immediately after meeting and even found out that they had a lot in common! Baffled? So were we, till we got to know! 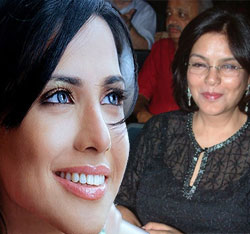 To begin with, Nikita and Zeenat were both Miss India at different points in time. Both began their careers with interesting roles. Their food habits and taste in clothes are also pretty much similar. And both Nikita and Zeenat are health freaks.

Obviously then, Nikita just can't seem to stop gushing about the yesteryears' diva. "Zeenat aunty is so nice and humble. We got along like a house on fire. Because we're both perfectionists, we would rehearse our lines for hours altogether," says the upcoming actress. She goes far enough to call her friendship with Zeenat the best part of shooting for 'Monopoly'.

"I learnt so much about acting from her. She has loads of knowledge and yet, she is so down-to-earth," quips Nikita. While we agree that Zeenat can charm the birds out of trees, we're not sure she'll take too kindly to being called 'aunty'. Despite her years, she can still give these pretty young things a run for their money, isn't it? Bad choice of words, Niki.