View Profile
The Star Plus afternoon slot show, Humari Devrani is garnering more eyeballs with the upcoming twist pertaining to the daughter of the Nanavati family, Daksha played by Purbi Joshi. Daksha is the only sister of these brothers and the coming episodes reveal the manner in which the Bhabhis of the house had cooked up a plan to throw her out of the house.
Before the strike commenced, the episode telecasted was that, “Mohan brings back his sister Daksha on the eve of Diwali. Every body is surprised to see her. Mohan’s mother gets angry and orders to throw Daksha out of the house. "I get tensed when I see her in the house, this is the point when all my devrani’s ask me about what had happened earlier, and the story goes in flash back,” says Manjula aka Urvashi Upadhyay. 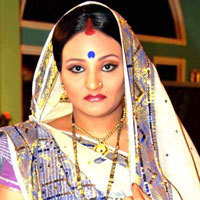 “This is when the story goes in past where the scene starts with us; first three bahu’s entering the house of Nanavati after marriage. We see that Daksha is the favorite of everybody, especially the brothers, for who she is their world. Then one day bapuji on the occasion of Diwali decides to give everyone their share in the will. He prepares an FD of Rs. 25 crore for Daksha which irritates all three of us,” she chirps.

What was the reason behind removing Daksha out of the Nanavati family? “This is the main twist. In the later episodes, they will show that these brothers are looking out for a groom for Daksha who can become a ghar jamayi. This pisses us more and we think that if Daksha stays here we can never get our respect. So we plan to get her into a love tangle with a guy called Deepak who is planted by us. We lure him that once he is successful in running away with Daksha, we bhabhi’s will give him his share of money,” states the actress.

Brothers have found a guy and the preparations for marriage are in full swing. “Daksha has fallen in love with Deepak but they don’t run away, instead she is all ready to sacrifice her love. This is the time when we all three, me and my other two devranis join hands to somehow hurl Daksha out. On the day of marriage we tell Deepak to create a drama of suicide and then we tell Daksha to go and make him understand. As soon as she leaves the house to meet Deepak, we three create a scene in the house that Daksha flew away with her lover", explains the elder bau, Manjula.

"This shocks Baa and Bapuji and other members of the house. After few hours Daksha returns home for marriage, and this is where misunderstanding created by us starts and bapuji dies of heartattack. All these brothers and baa throw her out of the house and then she marries Deepak is the story till now,” concludes Urvashi.

Well Shobhna Desai certainly knows the nerves of the audience… Isn’t it!

HurmeetB 12 years ago isn''t this the same story as teen bahuraniya?

+ 8
12 years ago I hope Daksha brings out the truth in front of everybody.

exclusive
Exclusive If a project is good and the people involved matter to me, I ...

Satyamev Jayate 2 is meant for the big screen and the masses : ...

Stereotyping an actor is foolish: Akash Ahuja aka Purab of ...

Esha decides to snatch Raghav away from Pallavi in Mehndi Hai ...