Sunil Agnihotri, Producer of the new paranormal show Black on 9X says that his show might go on air either in the last week of January or first week of February. It will be a daily inspired by the cult show X files. Each new story may go even a week or beyond. 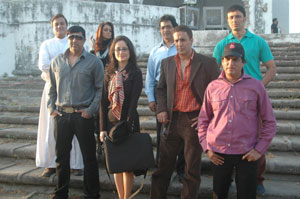 On the casting of Mamik he says, “We needed some one who would fit the bill of an investigator”. But will such a genre work in prime time(around 9-10 time band)? “Today audiences are receptive to good experimentation. The success of COLORS is a big example of that new vision. It smartly did not go down the normal Sas Bahu routine. Above all, did shows like Aahat not rock? All depends on the presentation, I would say”, states the producer.

Coming to 9X, Agnihtori feels that the channel was let down by its own earlier creative team and certain production houses too. “These guys pushed the budgets beyond limit causing the recent trouble. I could have made some of those shows at a much lower cost. But that stage is now over as Peter Mukherjea is getting the channel a fresh look. Black may be the first of a number of new presentations on the channel. Besides the above show, I am also making another fantasy drama for the same channel, called Betal Pachisi which might come on air in April”, states Sunil.

Sunil is a past master of this genre, as he had earlier made the path breaker Chandrakanta for DD. However, our channel sources say they have no information on Black.

Let’s see what this paranormal show has to offer to the audience!!

I miss Amigail sooooooo much i cnat wait to see my rakun again luv aamir & ABigail u are the best!!

-Preeti- 11 years ago I loved chandrakanta, this sounds good
so new show in 9X, i hope they also start airing the new epi''s of old shows too that were left mid-way

Ultimate_Shadow 11 years ago this show will not work...men in india hardly watch serials and women...they cant imagine anything different except family drama...so i dont think it will work..