Mumbai, March 28 (IANS) Romancing younger men on screen seems to be in vogue in Bollywood. The latest to join the bandwagon is Bipasha Basu who pairs up with Ranbir Kapoor and Neil Nitin Mukesh in two of her forthcoming films.

While Ranbir is Bipasha's co-star in Siddharth Anand's 'Bachna Ae Haseenon', the actress teams up with Neil in new director Jehangir Surti's 'Freeze'.

Bipasha plays a slightly older co-star to both the coveted debutants of 2007 in the films.

In 'Freeze', Bipasha is cast as a deejay to Neil's role of a high-flying photographer.

The 29-year-old is at the moment reluctant to talk about her role. 'We're in discussion. I like the script. It's too soon to talk about it,' Bipasha told IANS.

Neil, who is three years younger, is also cautious, but far more forthright. He s 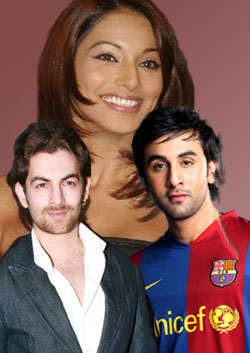 Featured Video
aid: 'Yes, Bipasha is opposite me in 'Freeze'. And I'm really excited. She's someone I've always admired.'

Mention the age difference and Neil gets immediately embarrassed.

'Nobody will notice that she came to the industry before me. Our characters justify our presence. She does play someone older.

'Is she really older to Ranbir in the Yash Raj film? Just a coincidence, I guess. In our film together I play this guy who starts off as down-and-out and then goes to become this really big name in his field.'

Neil says he likes playing characters with a graph.

'Johnny Gaddar' had that graph. I went from greed to atonement. My second film 'Tera Kya Hoga Johnny' with Sudhir bhai (Mishra) is again a character with shades. I start 'Freeze' in April.'

Bipasha was reluctant to do another film where her co-star was younger, but her boyfriend John Abraham convinced her.

'That's true,' said Neil. 'Bipasha did have her doubts when she read the script. But then John Abraham who happens to be a pal of the 'Freeze' director happened to go through the script. He convinced her to go for it. John is a really cool guy. And Bipasha, she's hot! I hope John doesn't mind my saying so.'

A few years ago, Dimple Kapadia dared to team up with Akshaye Khanna in 'Dil Chahta Hai', Saif Ali Khan in 'Being Cyrus' and Amol Mhatre in 'Leela'.

Earlier, Deepa Sahi teamed up with Shah Rukh Khan in 'Maya Memsaab', Rakhee Gulzar with Rishi Kapoor in 'Doosra Aadmi', not to forget Nutan with Amitabh Bachchan in 'Saudagar'.