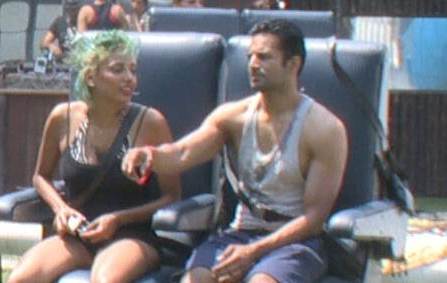 As the contestants of the house are currently in a mood for the conflict and take revenge from each other during the given task in Colors' popular reality show Bigg Boss 8 the inmates are indulging into much heated arguments with each other.

We heard from our source that, "Now, Diandra will get offended over RJ Pritam's comment. During the Hijack task, Diandra wore a Bikini top to which Pritam commented that, "Aap kuch bhi pehno apko sab dekhenge." He also told her that, "The footage of your task won't be shown on National Television as you wore such revealing clothes which won't be aired on TV."

Our source further added, "Diandra will get offended over the comment of RJ Pritam. She will say to Upen who was sitting next to her that, "Upen, I think we have forgotten that which century are we living in!"

How far the spat of Diandra and Pritam will go?

3 years ago This movie is fails to attract the audience and the story the movie is not good and it is totally waste of time movie but Vinay Pathak's acting is amazing.

kabeerghosh 9 years ago Guys are you joking !! What I and my friends feel who have seen the movie today is that this movie really entertained us from the very first scene (airplane scene). The altercations are sweet, the comedy subtle and the backdrop (Himachal, untapped) majestic. Most of the dialogues are really funny without seeming to be. It is a very real subject treated funnily and I atleast seemed to connect with it a lot.
And the locations are beautiful. I have made up my mind that I will go on my honeymoon in a motor home. Jagrat and Sasha have done a great job in their debut performance with mind blowing performances by Vinay, Darshan and Sushmita. But to my surprise the one person that stood out was the little brother of Jagrat , Rohan who effortlessly made all of us laugh and emoted what most established actors feel tough doing.
The film gives us hours of space to smile and chuckle at a couple that has just discovered the flip side of love and romance.