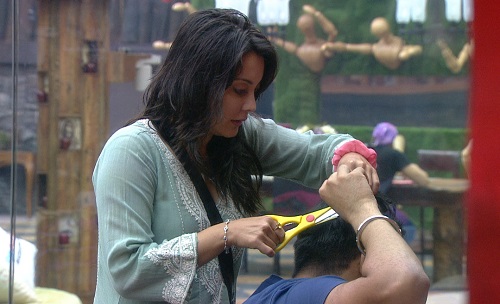 It's certainly not an easy deal for the contestants of Colors' popular reality show Bigg Boss 8 to deal with their inmates while there are differences in their thoughts. This is what leads to fights and controversies in the house.

Now, we came to know that Arya Babbar and Praneet Bhatt will indulge into an argument over a scissor because Arya lied to everyone for the purpose of using the scissors.

We heard that, "Arya asked Minissha to lend him a pair of scissors as he wanted to cut an uneven strand of his hair. Minissha told Arya that her scissors are kept in the wash room. Arya asked Minissha to secretly bring him the scissors that are kept in the kitchen. Now, this was the trigger for a fight in the house after Minissha get the scissors from the kitchen for Arya and Praneet sees her. Praneet Bhatt raised the issue before the fellow contestants because recently when he had done the same thing by using the scissors for his personal use then the other inmates have gone against his act raising the question of personal hygiene which led to a huge argument."

Further we also heard that, "Arya lied to Diandra (Diandra Soares) and Upen Patel that Minissha wanted to cut a loose thread that's why she used the scissor. He did not reveal the truth because Arya suffers from hair psoriasis and it might have caused infection but Minissha told Praneet the truth when he asked her. Eventually, Praneet becomes upset after knowing that Aarya lied to everyone and he confronts him. Followed by some arguments Arya further apologized for lying."

How far their fight will go? Will Arya and Praneet resolve their differences or will it continue as a cold war? Only time will tell.

ibelieveinpink 9 years ago Congratz to Aishu and Abhi and so glad everyone is celebrating with them! I agree with those who think the media is making a big fuss. But I'm just happy (as a fan) to see new pics of her!

rani-lucki 9 years ago seriously has the world no other work to do but to just talk about what is going on in ashs stomach
congrats n everything but this is getting silly---she isn't the 1st celeb to get pregnant :-)

taral83 9 years ago hm...Don't want to sound rude, because I only wish good for the baby to come. But man, she isn't the only one pregnant in this world. It actually getting annoying now to hear about this every where you turn, like who cares. Being a mother is truly a miracle but she isn't the only one that will be a part of that miracle. Just give it a break media! Well, good luck to the parents to be and hope she has a happy health and beautiful baby.

_NehaLvsK.Wahi_ 9 years ago God Bless u Aish & Abhi..love u loads

U guys just cracked me up

shine_bright 9 years ago Oh wooow.
People need to get over Ash.
Congratulations && God Bless You ..and everythinggg ..but GEEEZ!
Give the baby some space man!
There are articles like every other daaay. I haven't heard more than one article on Lara Dutta's pregnancy ..oor never even knew about Konkana's baby ..

Rafeal. 9 years ago Seriously enough of publicity !! Feel for that child.. HE is not even born and so much hype !

"Aish's favorites also being included, cooked to her very taste since the mother-to-be is currently fussy about having her edibles plain and simple. Though, the party did wrap up early as Aish had to sleep as per her temporary schedule."

LOLLL...I mean congratulations to the couple for having a baby soon but seriously so many actresses have gotten pregnant and no one's pregnancy has been as highly publicized as this...after a point im thinking WHO CARES?!