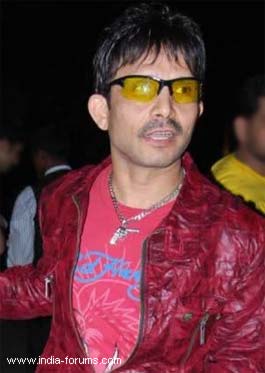 Actor-director Kamal R Khan, who featured in the third season of 'Bigg Boss' and was asked to leave because of his acrimonious fights with his inmates, feels the latest version of the reality show is more about fights than entertainment.

'It is difficult to differentiate, but one thing that came across very clearly was that this season of 'Bigg Boss' was high only on fights and abuses and fell short when it came to entertainment. From day one I have been following it, and I could only see cat fights on the show, contestants yelling on each other,' KRK told IANS over phone.

'They (contestants) probably thought that the more they would fight the bigger stars they would become. I feel they came with this mind set,' he added.

Surpisingly, KRK was asked to leave the 'Bigg Boss' house for his intolerable, abusive and uncouth behaviour since the beginning of the show and his fights with inmates - Bakhtiyaar Irani and his wife Tanaaz Currim and Poonam Dhillon.

The finale of the fifth season of the reality show is to be held Saturday and Juhi Parmar, Amar Upadhyay, Mahek Chahal, Siddharth Bharadwaj and Sky are vying for the big prize, which is Rs.10 million.

Meanwhile, KRK is confident that Siddharth will win the show.

'Siddharth is going to win this show. I am very sure about this. He has won reality shows even earlier and has been anchor on MTV. He has a strong fan following when it comes to young crowd. And moreover, I feel he is a deserving candidate,' he said.

When asked about his opinion on the show's credibility being question by former contestants, he said: 'I have said this many times, and I can say this with assurance because I have been there and have tasted the fruit. 'Bigg Boss' is the only show till date that is completely real. It is not fabricated, it is not scripted. It runs only on public demand and decision. Nobody else can run it.'

'It is a 100 percent real show. There is no point bad mouthing about the show after being evicted. Pooja Missra and Pooja Bedi have been doing that but they should be happy with whatever fame they have been able to gather from the show. Putting the blame on Salman Khan (host of the show) or saying wrong things about them will not be of any good,' he said.

shivani003 8 years ago Although I hate KRK to the core but for once I agree with him. This season was the crappiest and least entertaining out of all 5 seasons.

sarasingh86 8 years ago Someone said the only person who is following krk on twitter amongst all BB contestants is sid. Now i know where the support is coming from.Anyways , krk is big joke himself and look he is giving his expert analysis.

Mishh007 8 years ago Krk agar fights k bare me baat na hi kare to behtar hai. Although he is right in a way , but atleast contestants of this season don't throw bottles at their inmates!!

zoya-shah 8 years ago look who is talking.lol.the great king of tamasha.krk.he's right in a way.this show sucks in every season.