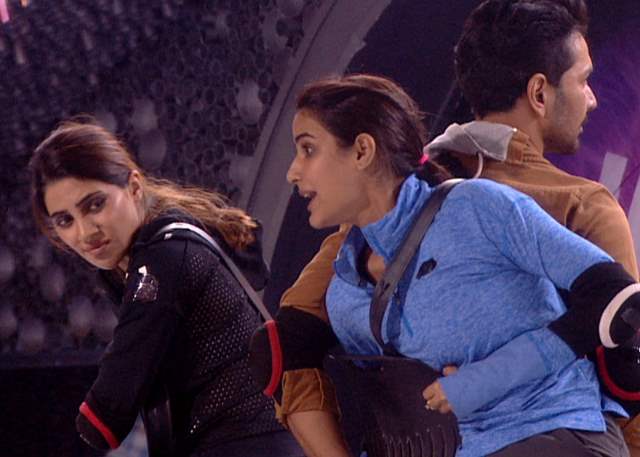 The Finale Week is seeing the housemates at their aggressive best inside the house. Fresh from her outburst with Kavita, Rubina is seen dominating others inside the house. She starts the day by saying that everyone should do their own individual duties rather than sticking to what has been assigned to all. Rahul and Jasmin take a stand and say Rubina is trying to spoil the balance in the house. Even Abhinav agrees that Rubina’s decision is not sound.

Jasmin is also seen taking a dig at her old foe Eijaz, and says how he has used his personal life problems to seek attention on the show. Eijaz is very hurt by this and he enters into a shouting match with Jasmin. Even Rahul is seen supporting Jasmin, however, Eijaz refuses to stand down! While Eijaz accuses Jasmin of having a ‘bhaade ki soch’, Jasmin says Eijaz has a ‘bhaade ka character!’

Next up is the super-entertaining boat task which Bigg Boss gives to the contestants. All the housemates, except for Eijaz, have to ensure that they get seats on the boat until the task is over. Given the fact that there are fewer seats on the boat than housemates, it is a really bumpy ride! Abhinav, Jasmin and Nikki have an epic clash as all the housemates hang on to the seats to fight to reach to the top 4!

BB 14: Rubina confesses she & Abhinav were to get divorced before ...