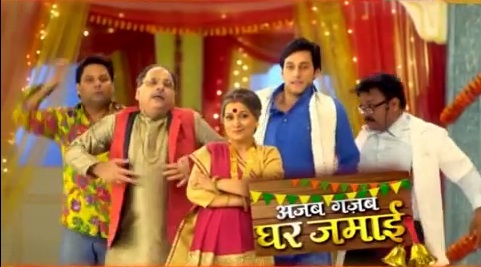 Indiaâ€™s one stop destination for Humor- Big Magicâ€™s comic caper Ajab Gajab Ghar Jamai has a chatpata episode in store for viewers this week! Fans are in for a humorous treat as their favorite â€˜Shaktishaliâ€™ family is all set to pursue their much loved nani to be a successor in her will. Watch the humorous damaads and their wives flatter the witty nani in a series of entertaining events this Friday 18th July 2014 at 9.30pm!

As per the track, as Nani realizes that itâ€™s time for her to retire from the daily chores, the housemates assume that she intends to make her own â€˜wasihatâ€™. With the desire to possess all the wealth and be named the successor, all the  Jamais and their respective wives begin to flatter and butter Nani but little do they know what clever Nani has in store for them that would turn their world upside down!

Featuring some of the best in comedy and television entertainment, Ajab Gajab Ghar Jamai is a fresh, comic take on the generations of the unusual â€˜Shaktishaaliâ€™ family. The one of a kind family comedy, Ghar Jamai has captured the audienceâ€™s imagination with its delightful storyline and stellar cast featuring Himani Shivpuri and Sumit Vats. Aired on Big Magic at 9.30pm, the show has received a lot of adulation from fans and critics alike. Over social media, there has been an outpouring of praise for the well-crafted script, the actorsâ€™ quick comic timing and their unique chemistry.

AnannyaRamsey 6 years ago Hey Sumit don't forget
you are the best :-)

Priya258 6 years ago Sumit rocks as CHINTU in "Ajab Gajab Ghar Jamai".He is such awesome actor who can do comic scenes so smartly!

synic 6 years ago Sumit Vats wish you all the best in your career along with good health. God bless you

Ranjinikishan 6 years ago sumit is rocking in the show..chintoo is the only character worth to watch..god bless u my hero

adinats07 6 years ago SUmit vats keep up the good work.. all the best