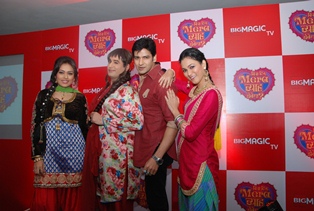 An adaptation of the extremely popular Pakistani madcap comedy with the same name, Kis Din Mera Viyah Howay Ga is designed to tickle the funny bones of the audience.

Produced under the banner of BIG Production, this witty sitcom, with an ensemble of quirky characters premieres on BIG MAGIC on Monday, 25th November at 9:30pm and promises to transform every smile into burst of laughter.

All set to add more laughter and entertainment to the lives of Indian viewers, the refreshing new Indian daily Kis Din Mera Viyah Howay Ga! showcases the life of Choudhary household and their biggest nemesis Marriage'. All young members of the family are desperate to get married but owing to their amusing obsessions and strange circumstances they all land up in hilarious mismatch.

A character driven sitcom, the Choudhary family from Delhi will have the entire nation in splits with their superlative humor. The pivotal characters of the show include head of the Choudhary Parivar- Kayamat Choudhary; his wife Manorama; a 40 year old unmarried younger brother Komal obsessed with Moustache; a younger sister Billo, of marriageable age and their whacky housemaid considers herself as a part of the Chaudhary family and secretly dreams of marrying Komal Choudhary. Amidst all the confusion of finding a suitable match and getting married, one question which lingers on every character's mind is- Kis Din Mera Viyah Howay Ga!!

Pankit Thakker who essays the character of Bablu quips "Pakistani sitcoms have a different appeal and are dialogue driven. I am excited to play one of the main leads. The best part about the character is that he is not so Seedha! The twist about my character will be revealed soon."

Manoj Malhotra who essays the character of Komal says, "I was hooked on to this character Komal since the time I was narrated the script. Such a Dil-Phaink, Bollywood obsessed character gives a lot of scope to an actor to grow. Also my character Komal is obsessed with moustache even though he doesn't have one of his own!"

Neetha Shetty playing the role of Peeno says "I am thrilled to have landed the role of Peeno who is an outright eccentric character in the Choudhary household. I really liked the story; it's the perfect project for me to explore the comedy genre. I am looking forward to the reaction of audience to my portrayal of a crazy Punjabi kudi who is head over heels in love with her employer."

Sonu Chandrapal who plays Billo talks about her role "I had never done a comedy show before so this  show is my first ever attempt in comedy.  I am sure my character of Billo will make her way in the heart of the audiences with her wit and charm."