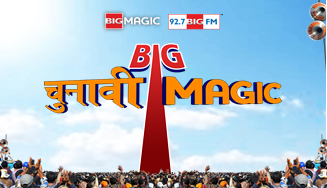 Breaking away from the heat of the political campaigning, vote appeals and endless debates doing the rounds in the country, 92.7 BIG FM and Big Magic come together launch a refreshing satirical offering this election season titled ;'Big Chunaavi Magic'.

With talented comedians like Sugandha Mishra and Mantra teaming up with the best of mimicry artistes and comic talent, the month long offering presents a light-hearted perspective on the election scenario in the country.

The special offering launches on 27th April at 8pm on Big Magic and then each Sunday @8pm ending 18th May.  BIG Chunaavi Magic will play on 92.7 BIG FM through the month in the form of capsules, interviews, special segments and more. With the country's most topical subject being packaged in a humor offering, this special programming innovation promises to draw audiences.

An exclusive Hasya Kavi Sammelan - an out and out laugh-out-loud one hour special which will see the best comedians coming together, delivering a unique comic rendition to the Elections

Seedhi Ungli - a comic take on the election scenario encouraging people to extend their seedhi ungli to vote and rectify the tedhi system in our country.