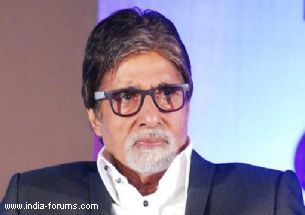 He is 71, but loves the songs that his children and grandchildren love. Megastar Amitabh Bachchan enjoyed listening to Oscar-nominated Pharrell William's songs "Get Lucky" and "Happy" even if he couldn't fathom their lyrics clearly.

"Pharrell William and 'Get Lucky' on a loop... the kids make fun of me... me thinks he sings 'mexican monkey' when in fact, he sings 'makes it get lucky' but on the track, it's grooving and sounds like yaaa (sic)," Amitabh posted on his blog Monday night.

He wondered "what is it that sticks the music to your brain for repeat and nausea".

"I have no idea, but whatever it is, it sure makes for continued good listening... at times, getting to shake the body and movin' and tremblin'. Spirits rise, tempo grows within, and before long you wish you were on your feet, on the dance floor, in a club, front of mirror... anywhere... its just 'get lucky'," he added.

After "Get Lucky", he came across "Happy", William's Academy Award-nominated number from "Despicable Me 2". Big B enjoyed its video too.

"It is hilarious, and most ingenious... how endearing and conceptually exact... want it to carry on... non-stop," he said.