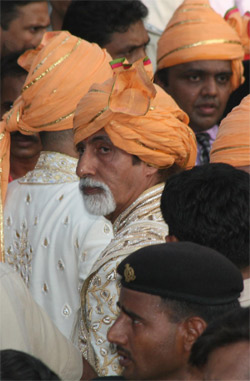 60 is the declining age in human life when most of the people bag their tension aside and think about enjoying a peaceful sojourn. But with the Shahenshaah of Bollywood, Amitabh Bachchan, the age is just another beginning for a new innings in life. And that is possible only because of a perfect combination of his fitness regime and healthy vegetarian diet.

Now, you must be thinking about what’s so new about it! It’s an honour that the matured second innings player has just bagged for his all veg sweat lost in the process of gaining his current stature. And guess the award.

‘People for Ethical Treatment of Animals (PETA)’ have recently awarded him as the ‘Sexiest Vegetarian in Asia’. In a survey conducted by PETA, Amitabh Bachchan was voted as the sexiest vegetarian male alive. Other Indian male who made it to the list is Madhavan. When it comes to Asian female contenders, Bollywood actresses like Hema Malini, Kareena Kapoor, Mahima Chaudhry and Vidya Balan were considered. But it was Hongkong’s singer-actress Faye Wong who won the title of Asia’s sexiest vegetarian female.

The result maybe little saddy for the Bolly-babes but they must be enjoying the award as all their favourite Big B has managed the cap. And guess what! Amitabh, by beating Madhavan, has proved the truth behind the phrase ‘old is gold’.
Featured Video