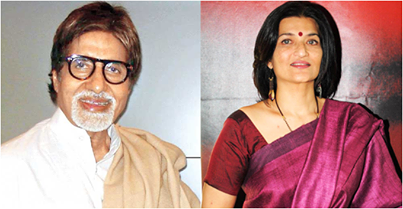 Veteran actress Sarika has gone on record to say that her prime reason to take up TV show Yudh was the attraction of working with megastar Amitabh Bachchan - again! But little did she know he would pull a prank on her on the sets.

If a source from the forthcoming show's set is to believed, the Big B got a "little playful in an attempt to scare Sarika during the shoot".

"It so happened that in one of the scenes where Sarika was supposed to bang the door on Mr. Bachchan's face, she was very watchful and worried that it shouldn't hit him. Big B took notice of this and decided to play a naughty prank on her.

"The moment Sarika shut the door on his face he screamed loudly scaring not only Sarika but the entire unit pretending that he got hurt," said the source.

The source said Sarika was almost in tears thinking that she has injured the megastar.

"In no time Amitabh opened the door and starting laughing at her and leaving one and all surprised and shocked."

In the show, Sarika plays the former wife of Yudhishtir Sikarwar, the character essayed by Big B, with whom she has appeared in four films, including Shoojit Sircar's yet-to-release Shoe bite.

cutypieshweta 6 years ago we are waiting , excite to see big-b on tv, and also waiting to see a good friend, young and talented actor 'himesh choudhary' first time sharing screen with big-b.