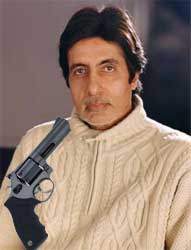 Many times we have seen Big B pulling out his revolver on screen. This time he has pulled it out again, but not on screen. For the first time he pulled it out to defend himself and to have a safe sleep.


“Last night, as the events of the terror attack unfolded in front of me I did something for the first time and one that I had hoped never ever to be in a situation to do. Before retiring for the night, I pulled out my licensed .32 revolver, loaded it and put it under my pillow. For a very disturbed sleep,” Mr. Bachchan wrote on his blog. “My pain has been the sight and plight of my innocent and vulnerable and completely insecure countrymen, facing the wrath of this terror attack. And my anger has been at the ineptitude of the authorities that have been ordained to look after us,” Big B expressed in his blog.


He further says, “I can only but salute them and respect their sincerity in the call of duty.” Bachchan was disgruntled over the cliche “spirit of Mumbai” which he said people were using to cover the traumatic experiences that the merry city underwent in recent years.

Its true insecurity can grip anyone, even a star like Big B.
Featured Video