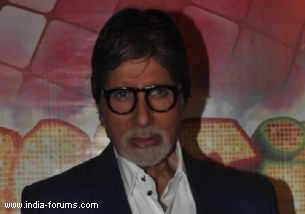 A social activist from Pune has accused megastar Amitabh Bachchan of promoting superstitious beliefs, and filed a complaint before a court seeking action against the Bollywood actor.

Hemant Patil has demanded a police complaint against Bachchan and others under the stringent new Maharashtra Prevention and Eradication of Human Sacrifices and Other Inhuman, Evil and Aghori Practices and Black Magic Act, 2013.

The immediate provocation for the complaint was Bachchan's portrayal of a ghost in a TV commercial for a children's health drink.

Bachchan earlier played a friendly ghost in Bollywood movie "Bhootnath", whose sequel "Bhoothnath Returns" is due for release soon.

"The advertisement promotes belief in the existence of ghosts and spirits and consequently the need for magic to ward them off. This is promoting false beliefs and promoting superstitions," Patil said.

He said when he tried to file a complaint with police in Bandra, they refused, compelling him to move the court.

Patil also said the health drink company released the TV commercial without adding an appropriate disclaimer before or after the broadcast.

Amitabh Bachchan becomes the first Indian to be honoured with 2021 ...