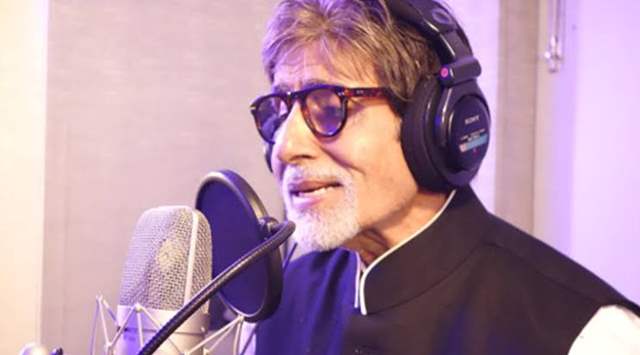 Amitabh Bachchan took to social media to release the song ‘Atkan Chatkan’ is presented by A.R. Rahman and a ‘Drums Shivamani Musical’_

India’s largest streaming platform ZEE5 recently released the trailer of their upcoming original film ‘Atkan Chatkan’ and the musical has been receiving immense love from media and fans alike. Adding another note to the celebration, veteran actor Amitabh Bachchan took to social media to release the very first track of the film - ‘Daata Shakti De’ which means GOD, give us strength a soulful track which will give you goosebumps.

Here’s a link to the song:

The story of ‘Atkan Chatkan’ revolves around a 12-year-old chai delivery boy named Guddu, whose passion is to observe, listen and create new sounds. He finds rhythm in almost everything. Through his daily mundane lifecycle, the story gets its rhythm when he forms a band with other 3 street children that work near his tea stall.

The song starts with Guddu hopelessly walking on the streets and he across the city temple about to start its morning arti. The soulful song starts with a verse from Hanuman Chalisa sung by Amitabh Bachchan. As the arti proceeds further, the song gives Guddu a sense of hope. The tanpura and sarod add magic in the background, while Mr Bachchan’s voice gives a soulful touch to the song. The story later progresses with them taking part in the biggest music competition in the city. The question is, will they be able to fulfil their ultimate dream by performing on the biggest stage? Or, will the street remain as their only chance of hope?

‘Atkan Chatkan’ will star Lydian Nadhaswaram who is stated as the world's best child pianist & A. R. Rahman's protege and will be seen in the lead as Guddu. The film will star Amitriyaan as Guddu’s father, Sachin Chaudhary as Chuttan, Yash Rane as Madhav, Tamanna Dipak as Meethi and Aayesha Vindhara as Lata, Guddu’s sister in pivotal roles

‘Daata Shakti De’ is sung by Amitabh Bachchan, composed and arranged by Shivamani, lyrics by Runaa Shivamani and background vocals from Ustad Rajkumar Rizvi, Sonica R, Krishna V, Anna, Devika & Nakul Abhyankar. Interestingly, other songs in the films are sung by veterans like Sonu Nigam, Hariharan, Runa Sivamani, and Uthara Unnikrishnan. The film is written and directed by Shiv Hare and produced by Lokaa Entertainment PLC.