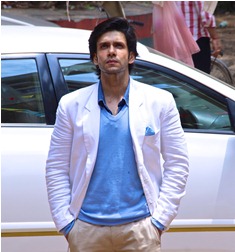 Star Plus's thriller drama Ek Hasina Thi is packed with men who have a lot of sinister elements about themselves like Shaurya Goenka (played by Vatsal Sheth), Rajnath Goenka (played by Ayub Khan) and Akash (played by Mihir Mishra), etc. In the midst of all this darkness enters Bhuvnesh Mann who will strive to bring some light to the dark plot.

Like Vatsal and Mihir incidentally even Bhuvnesh makes his comeback to Indian Television with this show. He was last seen in a cameo role in Star Plus'  Maykee Se Bandi...Dor. However, in Ek Hasina Thi he plays a very pivotal role which brings a very fascinating twist to the plot. He'll be seen essaying the role of Dev Goenka who is the cousin of Shourya Goenka. He is elder to Shourya and technically the heir to the Goenka business empire. Unlike the other men on the show Dev is righteous, honest and courageous. Extremely qualified, Dev doesn't use his Goenka surname as a mark of privilege and entitlement. While he was away Nitya was mistreated and his concerns for Nitya made him guilty that he wasn't there for her is the driving force of his life.

Is he is determined to prove Nitya and Payal's innocence and expose the real culprit? Will he recognize Durga Thakur's true identity?

Jaanu_d 6 years ago I love Bhuvnesh Maan. His character is coming up nicely- we need him to strengthen his character to make him very strong

+ 3
6 years ago woww...durga and dev..finally something good for durga! cant wait!!

6 years ago Thank god!!! Atleast someone will be positive in that super negative Goenka
family.

6 years ago waaow!!..i knew it..from the moment Sakshi talked about her son to her sister in law,i was like hhmmm..this guy is going to be the good one and the love interest of Durga!!..yay..just cannot wait..

6 years ago Can't wait for this.
loving this show every single day

6 years ago seems like he will be a interesting character against Durga!

+ 4
6 years ago Cant wait to see him and Durga together in one frame, it'll be exciting

6 years ago oh bah ki bhalo to. at least someone among the male lot is on the right side except durga's baba