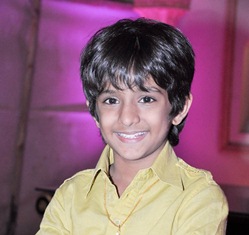 A jasoos from the set of CID has informed us that a special celebrity is going to help the CID team for a case. Do you know who is that person? Read on to know more...

Bhavesh Balchandani, the Veera fame kid is ready to help the CID team in an upcoming episode. A source from the set has informed that Bhavesh will be seen portraying the role of Bunty in the show.

In the episode, ACP Pradyuman, while investigating for the case gets injured and loses his memory. Later, a kid Bunty finds him in a bad condition and helps him in recollecting his own identity while he himself seems to be in some trouble.

Will Bunty be able to help ACP Pradyuman to gain back his lost memory?

milla 9 years ago I am very happy that Karisma is coming back. I j am a huge fan wish her all the best

psycho_angel 9 years ago sounds like a real c-grade movie...dangerous ishq??

WhiteNights. 9 years ago Loved this news. Finally, she decides to be back. yay. I don't like the title of the movie though.

kasucrazy 9 years ago Welcome back.. Looking forward to the flick

Yuvika_15 9 years ago MJS may nt hav dne well bt she outperformed amisha n akshay... she did gr8 acting!!

Nikhi. 9 years ago Ooh, sounds like something to watch out for! Good luck Karishma!

P.Kamaljit.Sean 9 years ago can't wait to seee her back...one of my fav b-town actress...

DarkUnicorn 9 years ago she seems to get prettier and prettier by the days... love herrr