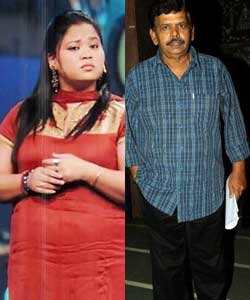 Bharti Singh who is presently seen in Sony TV's Comedy Circus - Ka Naya Daur will be seen in a episodic of weekend thriller Adaalat. Bharti will essay the role of a Stand Up comedian who will be accused of her Producer's murder.

A source informs about the track, "Bharti will play the role of a Stand Up comedian who makes fun of his producer in her acts. Unfortunately the producer gets murdered after which Bharti will be accused of it."

Vinay Apte, who has been associated with a lot of movies, will play the lawyer against K D Pathak (Ronit Roy). He will portray a negative role who is completely against KD and who will go to any extent to prove him wrong."

TellyBuzz tried contacting Bharti Singh and Vinay, but both of them were unavailable for comments.

Bharti and Vinay have already started their shoot and their episode will be on air Sunday, 7th August, on Sony TV's Adaalat.

adutta94 9 years ago OMG this show is getting interesting day by day. bharti in adaalat. it'll be fun 2 watch. can't wait 2 see it. love u ronit as KD. u ROCK!!!

shivani003 9 years ago Hmmm for once she will be doing something serious. Lets see how this will be.

Looking forward to it.. thanks for the article!

-Nightingale- 9 years ago why new lawyer...the ladies werre doing such a wonderful job...anyways ..best of luck to Bharti and Adaalat

Great to see her in my favourite show!!!!

Wistfulness 9 years ago She will feature in Adaalat??
I never saw a real comedian in crime show.

Priyanka Chopra Expected to Win an Oscar? To be One of the ...
9 hours ago