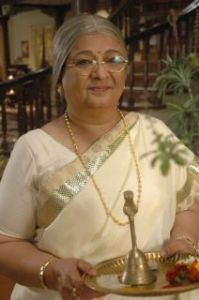 The veteran Marathi actress Bharti Achrekar, who after completing the pilot shoot for Star Plus's Khamoshiyaan, stepped in to essay a very wacky role in SAB TV's Chidiya Ghar, now has something more in her kitty.

A source informs, "Bharti Achrekar would now also be seen in Life OK's Meri Maa as Kaushalya Bua. Her entry is expected to go on air by tomorrow as she has already shot for the show. Her character in the show would be on a on and off basis."

"Kaushalya Bua is a very strict women,sharp in her thinking and one who knows every little thing that happens inside the house,"signs off the source.

We contacted Bharti and she confirms, "Yes, I would play Bua in the show. Hope audience likes my character."

..-Ayesshhaa-.. 8 years ago Early waiting for khamoshiyan because of my baby Mohit [8->]

krystel21 8 years ago OMG I love Bharati Jee! She's one of the finest actresses in the Marathi and Hindi Telly/Film industry! I'm like dying to see on screen in a good show!

On a side note, when IS Khamoshiyaan gonna air on SP? Isn't that the show with Mohit Sehgal in it?

exclusive
Exclusive Jaan Kumar Sanu on keeping up with Bigg Boss 13, looking up ...
7 minutes ago

Subuhii Joshii loses weight all by herself
14 minutes ago