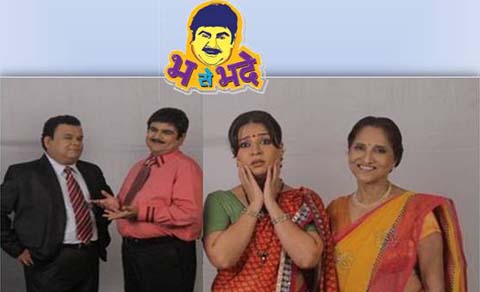 Bhade (Deven Bhojani) is a middle aged man who is kind and loving not only towards his family but is a helping hand to all around him. He has the super power to take over the pain of others which becomes troublesome for his family but the good natured Bhade always does so smilingly.

His family comprises of his wife (Suchita Trivedi), son and daughter-in-law and his crippled mother-in-law (Sarita Joshi). Bhade has a sweet love and hate relationship with his saasumaa who feels that her daughter will be better off without Bhade who gets home unnecessary problems from strangers.

Bhade is shown to be working in an insurance company where his boss (Atul Parchure) is a big time foodie and someone who is after the team to complete their targets.

In the episodes seen till now, we have seen Bhade taking over the problems of others like the fractured leg of a child who wants to play on his birthday, the sickness of a couple who want to get married and even of the Pandit who will be getting them married. He also takes over the ghost which has entered his boss's body and takes over the bad habit of lying from another person.

The concept itself is something new. Taken from the noted Marathi writer V. P. Kale who had written this many years back it is was unexplored territory till now. The writer Sachin Mote has done a good job of retaining the original flavor while adding modern hues to it making it an enjoyable comedy of errors. The show also manages to subtly add a social message with a punch of humor which works really well. 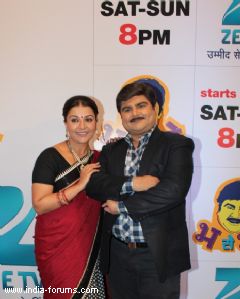 The show has the unique Hats Off Productions touch to it and reminds you of their earlier hit shows like Sarabhai Vs Sarabhai, Khichdi and Baa Bahu Aur Baby. Sarita Joshi, Deven Bhojani, Suchita Trivedi and other actors who were part of these shows are seen in Bh Se Bhade and you can see there comfort level while acting.

Deven Bhojani who is seen as a middle aged man for the first time on Indian TV does full justice to the role while veteran actress Sarita Joshi in her different get-up adds the much needed spice. Atul Parchure as Bhade's boss and Suchita Trivedi as Bhade's wife have their own character nuances giving a humorous touch to the show.

Nothing as of now and the show is entertaining as it is but we just hope that the situations don't get repetitive and the makers have enough original story ideas to make the show more entertaining.

Without being loud or garish, Bh Se Bhade with its unusual theme of a man having super powers getting into comic situations is entertaining and a must watch as a start up for the weekend evenings.

It is a lighthearted, pure family entertainment which can be enjoyed by kids and adults alike. We can say that it is also far, far better than the regular weekend reality shows and makes for a light, fun-filled family evening watch.

7 years ago It's a dream come true for me!!!! Gattu baa and Meenakshi together again!! That too working with Hatts off production!! :D :D

7 years ago Awesome show.. Thnx Zee for this great show

7 years ago Liking this show on weekends, especially Bhade DIL Menka and his boss..these two are very silly and funny at the same time. Nice show !

7 years ago Of course. Hats Off production is pure creative brilliance. It is only expected that they will bring another gem onscreen.

dakshayani 7 years ago This is a great show - seems very different from the current lot. The entire cast is doing an excellent job. But as someone pointed out this show might not garner the trps for the same reason. And that would be very sad -indeed.

7 years ago I agree. Excellent show. Great acting and humor that is not vulgar or cheap or even OTT for that matter. However, I have a feeling that it will shut down soon because people really don't appreciate creativity in India. They just want to watch all the melodrama. Therefore, it won't get the ratings. Another reason is it might get repetitive as mentioned in the article.