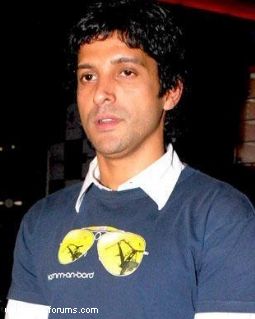 Filmmaker Farhan Akhtar has warned his fans against a fake poster of his upcoming film 'Taalash' that is being circulated online.

'Please beware of a fake 'Talaash' poster doing the rounds... it is not the official first look. That is still to happen,' Farhan wrote on microblogging site Twitter.

Directed by Reema Kagti, the film stars Aamir Khan, Kareena Kapoor and Rani Mukerji. The suspense thriller is also being co-produced by Aamir along with Farhan and Ritesh Sidhwani.

Aamir plays a cop in the film.

In the film, Ranveer cons girls for a living but finally finds his right match in Anushka Sharma. Apart from Anushka and Parineeti, the film also stars Aditi Sharma and Dipannita Sharma.

Onir all praises for Aamir

Filmmaker Onir has praised Aamir Khan and Kiran Rao for including both Khan and Rao in the surname of their newborn son Azad, calling it an important gesture.

'I think its lovely and really progressive that Aamir and Kiran included both KHAN and RAO in their son's name. An important gesture,' Onir wrote on miccroblogging site Twitter.

Aamir-Kiran's son was born Dec 1 through IVF to a surrogate mother at a private clinic in Mumbai. The couple resorted to IVF due to medical complications.