View Profile
The mystery surrounding Bachchans' policy of not releasing a picture shot of the 9th Bachchan, Aishwarya and Abhishek's new born daughter, has led to an inevitable round of speculations among media and fans.

While the family, especially Grandpa Big B, has asserted 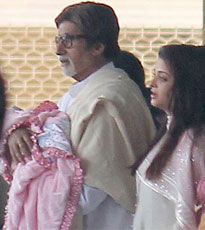 that the idea is keeping their precious family moment private, the grapevine is abuzz with significant offers that have knocked the doors of the Bachchan home. With tabloids and magazines vying to get exclusive copyrights of the first release of any shots of the baby girl, the competition is stiff, and whopping amounts of upto Rs. 5 Crores have been quoted by sources. Yet, grand as that sum sounds in the national currency, one can't but help compare with the likes of the 14 Million USD deal that Brad and Angelina had sealed for their biological child Siloh.

With regard to these rumours rife, Amitabh Bachchan tweets:  Media trying to build up story of sale of baby picture...ha ha ha ... good try media, it will never happen...  [(c) Twitter]

If the past is anything to go by, the Bachchans have a record of going to extremes to keep their affairs private, as had previously been the case with the Abhi-Aish wedding. Not very different from the present, gossip had done rounds then too, over the sale of exclusive copyright for the ceremony pictures. However, no such deals were ever made, contrary to all speculations.

Yet, between the paparazzi working overtime to acquire the rights and the Bachchans remaining firm on their privacy stand, one can't help but wonder if Beti B isn't already the million dollar baby of tinsel town's gen-next!