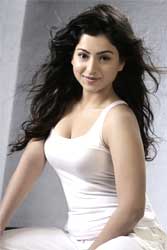 Following the successful portrayal of the role of Baby in Star Plus well admired show Baa, Bahu Aur Baby, Benaf Dadachanji after a break will now be seen in a different character in Zee TV's, Ek Veer Stree Ki Kahaani Jhansi Ki Rani.

A Little Birdie informs us that, "Benaf will enact the character of Ganga; the granddaughter of Dai Maa. She will be seen as a simpleton village girl who gets overwhelmed looking at the huge palace of Maharaja Gangadhar Rao (Sameer Dharmadhikari) and all the luxuries available in there. Her cameo role will go on in the show for duration of one and half month."

Our source also informs us that, "As Rani Laxmibai (Kratika Sengar) can't beget a child so her husband Gangadhar Rao decides to marry for the 2nd time to get a successor for his dynasty and Laxmibai will influence Ganga to get married to her husband. Also the character of Samar Singh will be shown dead in the coming episodes."

When contacted, Benaf Dadachanji confirmed the news saying, "Yes, I'm playing the role of a sweet, innocent girl Ganga. After performing the role of Baby for 5 long years I took a break, travelled a lot and then accepted this project because I found to be different then the routine."

If sources are to believed Benaf DadaChanji will star shooting from this weekend.

10 years ago baby .. you will rock .. btw you look gorgeous in that white dress

10 years ago its gud that is coming...most welcome...bt Samer singh why?...i luv his character he is 1 of most storgest pillar of Manu and Jhansi....the is geting boring ...n nw it will be more boring....WHY are CV's doing this....

10 years ago Seriously is this an elaborate joke?
Are you freaking kidding me? OMG they are really making this show into a saas bahu aur crap drama!
And why does Samar Singh have to die!! NOOO!
ok now I will stop watching this show :(

And Samar Singh is the best thing in it!!!!He cannot die!!!!

+ 4
10 years ago She is very good actress.She did awesom job as handi caped girl in Baa Bahu aur Baby.

10 years ago welcome back