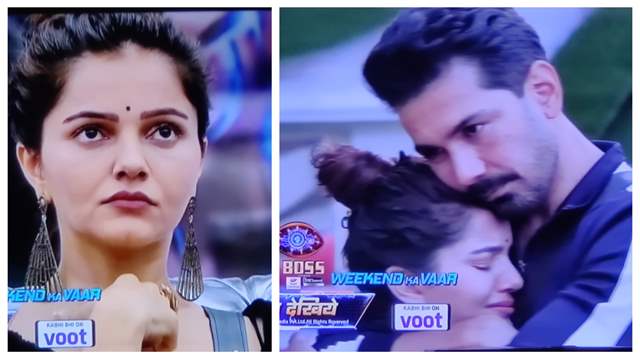 Bigg Boss 14 saw aj explosive episode end a while ago and needless to aay, a lot happened indeed. From the special panel coming in having a mini Bigg Boss amongst themselves to other games and Pavitra Punia's elimination, it was a ride.

Tomorrow will witness another mega episode and probably the biggest one indeed. Rubina Dilaik has an immunity stone as we know and that is currently up for grabs as Bigg Boss will announce. The only condition for the same will be that the contestants willing to have a chance at the stone will have to reveal a mega secret to everyone (publicly) that nobody knows as of yet.

While Eijaz Khan will come forward and absolutely break down where he will apparently say something that only his therapist knows, and not even his father. Further Nikki Tamboli will also be crying as she will share something that bit even her parents know.

Jasmin Bhasin will ask Aly Goni whether he will still love her no matter what the secret is.

However, the biggest possible revelation will come in the form of Rubina Dilaik and Abhinav Shukla. Dilaik will confess that their reason for doing Bigg Boss together was that they had given time to each other till November. She will confess that they were almost about to get divorced before the show and break down completely.

It will indeed be an episode to look out for, isn't it?

smallwonder 1 months ago Wow, what a revelation! lol... And at what a time! These guys know how to play BB, no matter how much they say we havent watched an episode. Sorry but I have started disliking this couple so much after last week. Its almost like now their true colors are out - I know its a cliché, but apt nevertheless. So damn irritating these 2 have become last week. The title of adhyapika also seems to get juistified now - it is very much true that Rubina twists and goes round and round in circles with heavy vocabulary, gets very irritating after a point. Was also very evident how she was cutting off Anibhav whenever he tried to say something. Abhinav, on his part, seems to have made a even bigger mess - sitting on top of the dustbin, unnecessary shouting - completely disgusted. And now to top it all, the BIG REVELATION hahah...

BeyondHorizon 1 months ago What drama is this? Hate Big Boss. They have made a tamasha out of everything and now even marriage. Such conversations always stay within a couple and not made public to everyone. Only goes out to show to what level people can stoop for fame and money.

LoLo 1 months ago OMG They just got married! Marriage is work and a successful marriage is hard work. You can’t give us so fast. Divorce is not the answer. Commitment, love and respect take time to become stronger and bond you.

anitarani 1 months ago But they seemed so happy together as per their posts on social media...

SilverBell 1 months ago No! Please It's Not True. Rubina& Abhinav Can't Get Divorced.. They Belong Together!