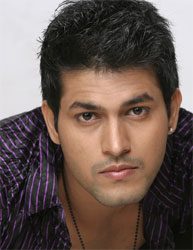 Featured Video
As we had reported earlier, Karan Sharma of Baa Bahu aur Baby fame was earlier finalized to play the role, but he was then moved to Ekta's other show on Sony, Pyaar Ka Bandhan.

The main role in Bayttaab has now been bagged by a new face, Manav Verma who happens to be the nephew of the Bollywood star, Raj Babbar.

Confirming this news, Vikas Goopta, Creative Head, Bayttaab says, "We have found a new face in Manav Verma who will play the male lead in Bayttaab Dil Kee Tamanna Hai. Many youngsters had auditioned for the role, but Manav is the one to get the role".

When contacted, the lucky Manav Verma said, "This is my first stint on television. And I am very happy to have got this role. I have been part of Nadira Babbar's theater group for four years. I have also been part of a movie titled 'Chalu Movie INC' which starred Rajpal Yadav, Vinod Pandey etc. I am basically from Jammu and Kashmir, and have always wanted to get into acting. I am the nephew of Raj Babbar".

Manav Verma will be essaying the role of a driver, Veeru who is like a right hand to the high profile lawyer Kunal Mehra.

The actor has started shooting, and his entry is expected to air tonight.

13 years ago hahah its written many youngsters auditioned for the role and its manav who got it...and in the new article its written hes thrown out coz of his bad acting...very interesting...im sure he must have not auditioned and said im the nephew of raj babbar and must have got the role !! Loser