After 4 & 1/2 years of dating one another, Harsh Vasishtha & Ritu Kambow are all set to tie the knot. The wedding will take place on 21st November in Mumbai. 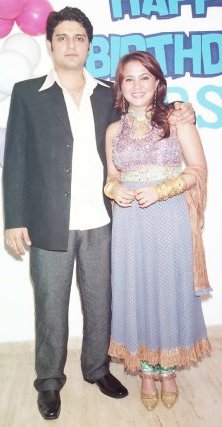 Featured Video
How did Ritu & you meet? "Ritu & I met on the sets of our show 'Vishwaas' and hit it off instantly. We also worked together in 'Shanno Ki Shaadi', and are currently doing 'Sunn Yaar Chill Maar' on Bindass." Their plans soon after the wedding? "We plan to take time off from our hectic schedules and go abroad.. maybe Phuket."

And what about television? "I'm enjoying playing a fully positive role in Banoo Main Teri Dulhann; I am proud to be associated with Zee TV's no. 1 show. I've done hardcore negative roles in Mamta & Parivaar, positive in Dulhann & Kumkum and out & out comic character in Sunn Yaar Chill Maar, where I have managed to portray nearly 40 characters!" Talking about his image, he says, "I don't have a fixed image in the industry. I like it this way as it helps me try versatile roles." he signs off.

Congratulations to Harsh & Ritu! Here's wishing the couple, a very happy married life and lots of success in their careers.

14 years ago He sings really well..go amitabh u rock dude..

14 years ago They look cute together. Wish all the best for them in the future.

14 years ago CONGRATS TO BOTH OF THEM..
THEY DO MAKE A NICE COUPLE.

14 years ago they look good!! nice couple and good luck for ur future life...