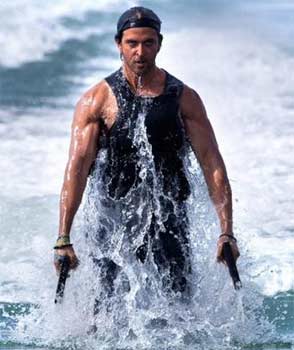 Hrithik Roshan and Katrina Kaif's forthcoming film "Bang Bang" seems to be on the right track. The movie's action-packed teaser was viewed by over 2.3 million viewers within 24 hours of its release.

Unveiled Wednesday at 8 a.m., the teaser has so far received over 2,400,000 views on videosharing platform YouTube and the numbers are still on the rise.

Hrithik and Katrina, who shared a crackling chemistry in the hit film "Zindagi Na Milegi Dobara", have also been appreciated for their looks in the movie by star friends like Priyanka Chopra, Karan Johar, Abhishek Bachchan and Sonam Kapoor.

The teaser has a heavy dose of guns, explosions and death-defying action stunts.

Directed by Siddharth Anand, "Bang Bang" is produced by Fox Star Studios and is being touted as the biggest action-romance of the year.

It will hit the screens on Gandhi Jayanti, which falls on Oct 2.