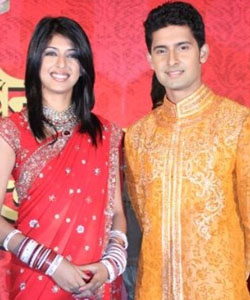 Wedding bells are ringing on the sets of Sony's Saas Bina Sasuraal and guess who the wedding planners are for Tanya (Aishwarya Sakhuja) and Tej (Ravi Dubey)? They are none other than Shruthi Kakkar and Bittoo Sharma. Confused? To make it clear they are Anushka Sharma and Ranveer Singh, the lead characters of Yashraj Productions upcoming movie Band Baaja Baraat.

But at the same time the lead characters have a different story to tell.

Speaking about the shoot Aishwarya Sakhuja aka Tanya says "Yes, there are stars performing for our wedding but unfortunately we did not shoot with them because we were busy shooting for our episodes. But it feels awesome that they had been modest to be part of our show and perform for us."

Ravi Dubey aka Tej says "We are in the process of shooting our wedding because of which we couldn't shoot with the stars and along with people from the film industry. There are Eijaz Khan and Kavitha Kaushik also performing for the function."

Well, seems like Tej and Tanya will see a starry and everlasting memories of their wedding..

10 years ago umm, what is this now? making serials look like award shows? i dont like it cuz it looks super unrealistic and plus, it doesnt really add TRPs or make the show interesting at all, according to me. Though, i do like this show :)

+ 2
10 years ago oh thats great....but does not look like the movie will be too successful

+ 2
10 years ago Eijaz Khan will be making a cameo on this show, I will be watching.

+ 2
10 years ago Aaaa! Can't wait! The wedding's back with a multitude of great performances!