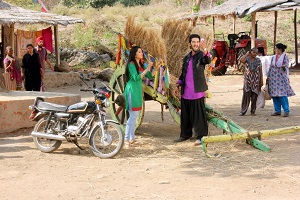 The audiences of Beyond Dreams' popular show Veera on Star Plus, have always enjoyed watching the cute comic fights between Veera and Baldev. The viewers will get to witness some more of their cupid fights in the upcoming track.

Well as seen in the show Baldev and Veera are always at loggerheads because of Baldev who is always up to some or the other mischief. His mischievous acts puts Veera in trouble every time.


Our source said, "In the upcoming track of the show, Veera (Digangana Suryavanshi) and Baldev (Vishal Vashishtha) will be meeting up in a market where Baldev will throw some hay on Veera's face then suddenly, Veera's phone will slip off from hand and the screen of phone gets damaged. On seeing her phone damaged, she will pick up some hay to hit Baldev with it. Getting hit by Veera, Baldev shouts at her. Baldev again snatches Veera's phone from her hand and gives her a warning that he will throw her phone if she will continue hitting him. Baldev also asks Veera to apologize him in front of the village people and to kiss him."

When contacted Vishal Vashishtha, he remained unavailable to comment.

Quite interesting! The upcoming episodes of Veera would be interesting to watch whether Baldev gets a kiss from Veera or not!

MrDarcyfan 6 years ago VEEBA are crossing the limit of cuteness! Just loving their scenes! It always makes me laugh!

munz. 6 years ago Vishal Vashishtha you are awesome... :) Digangana Suryavanshi you are a cutie pie. .

_SilentSoul_ 6 years ago Vishal Vashishtha... You are an actor of perfection. Love you.

plymouth 6 years ago Vishal Vashishta and Digangana luv you both

sunny303 6 years ago Vishal Vashishtha you're killing it with your expressions...and your hottie status;))

Mandana Karimi and Radhika Apte come out in support of ...
25 minutes ago