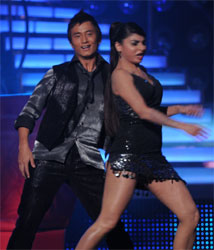 One of the heart throbs in Jhalak Dikhhla Jaa 3, Baichung Bhutia is in the limelight, as the shy, soft-spoken football captain makes all women go weak in the knees and that's the only reason nobody wants to call him Bhai.

"Recently a BT of him and his wife was shown on Jhalak which broke many hearts on the sets," says our khabroo.

The presence of his pretty wife had the desired effect. "Vaibhavi used to say that Baichung is not my Bhai but after looking at the AV, the poor judge decided to call him 'Bhai', while Juhi made her stand clear by stating 'Definitely my 'bhai' Chung!', quips the source.

The footballer grooved to the number of Shahid Kapoor. "Everybody is dancing on some or the other celebs of Bollywood industry this week, and Baichung danced ona song from Kismat Konnection. He was stunning as usual," concludes the source.

Well, as all women around him skip a heartbeat on seeing the footballer groove, the man in question seems simply oblivious!!

~*puja*~ 11 years ago really looking forward to watching it...

NIDIZ 11 years ago Amarnath on big B, Baichung on Shahid,Karan on Sallu bhaiya,Ram on S.R.K n that Ugesh on Hrithik. Wowwwwwe. I''m gona luv this.

-Preeti- 11 years ago he might be thinkin y his name is Bai chung ...lolz

ArmaansGirl 11 years ago lolz...so finally vaibhavi givees in2 Bhai huh? how swt<3 ooooh a sng of my shahid? <3
xoxo
sadi<3

Wrackspurt 11 years ago The Guys episode seems to be rocking......cant wait to see it :)

-AMIGAIL-LOVER- 11 years ago Awwwwww sooo sweet mwahhh cant wiat to see JDJ3 but was it not only SRL and Amitabh songs tehy danced to?

sapnamg 11 years ago Cant wait for tonight''s JDJ .. seems like the guys rocked this week... :)

Hathras case: Kangana Ranaut says 'Have immense faith In UP ...
51 minutes ago