Karan Singh Grover fans rejoiced when they heard of his comeback as Dr. Armaan in Star One's Dill Mill Gayye. They had yet another reason to smile when the actor confirmed that he is going to be part of the dance reality show on Star Plus, Zara Nachke Dikha.

But there seems to be a setback in Karan's preparations for the show. 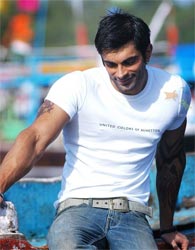 A little birdie tells us, "Karan has suffered a major back injury that has restricted his activity as of now. He has not been shooting for Dill Mill Gaye for the past few days, and is advised bed rest by doctors. So it looks unlikely that he will get alright in time to be part of Zara Nachke Dikha".

A point to be noted here is that, Karan was not even seen during the show's press conference. Till date, he has shot only for a promo and was not even seen in the exclusive music video shot at Karjat. While all the other contestants are making it count at the rehearsal halls, Karan has never been seen shaking his leg.

A contestant of Zara Nachke Dikha on terms of anonymity told us, "Yes, it is true that Karan has suffered a back injury which has forced him to be on bed rest. We have not seen him at the rehearsals, so this makes us wonder whether he will be fit enough to take part in the show".

An actor from the sets of Dill Mill Gaye also confirmed that Karan has suffered a back injury and is not shooting for the show.

The birdie told us, "There was a stage rehearsal organized yesterday for all the contestants, and Karan's absence was felt. But this does not mean that Karan has backed out of the show. There is a possibility that Karan be kept away from the dance floor for the initial episodes, as the concept gives room for a select few to perform every week. This will surely give more time for Karan to recover".

A person close to Karan though told us that, "Karan will not be part of Zara Nachke Dikha as he cannot continue dancing with the back injury suffered".

However, a spokesperson from the channel told us that, "These are all speculations. Karan is very much part of Zara Nachke Dikha".

When contacted, Fazila Aleena of SOL told us, "This is news to me. I really do not have any idea about Karan's injury. You are giving me a shock now".

Our attempts to get in touch with Karan Singh Grover directly were in vain.

nasha.karan 8 years ago Karan want to see u soon so can't wait for Aug when its coming?

Loving you could take my life, but when I look into your eyes, I know you're worth that sacrifice!
GET WELL SOON JAAN.

+ 2
10 years ago i hope you r alright now take care.dont think of dance before you are ok .take rest

10 years ago GET WELL Soon but you really don't have to do ZNKD PLEASE YOU NEEED REST AND PROPOER REST MAKE YOU FEEL BETTER AND YOU DON'T HAVE TO PROVE BOYS ARE BETTER THEN GIRLS PLEASE I REQUEST DO NOT PARTICIPATE IN ZNKD.

10 years ago oh my God I really hope he be alright soon
I can't watch ZNKD without him..
no way...

+ 2
10 years ago hey shona you are my superman ,take care and get well soon