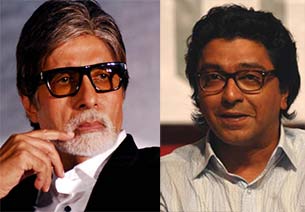 Bonhomie was evident at the much-awaited meeting between Bollywood megastar Amitabh Bachchan and MNS chief Raj Thackeray as they shared the dais at a programme here Monday after five years.

Burying past bitterness, a relaxed and smiling Maharashtra Navnirman Sena chief Thackeray virtually forgave Bachchan who had accepted the brand ambassadorship of Uttar Pradesh in 2008, which started the fracas.

"I have always felt that in the past 100 years, there has not been an actor as big as Bachchan. He is the brand ambassador of the whole nation, and not just any state," Thackeray said in a rich compliment to the actor, who was seen smiling.

He warmly urged the people to forget whatever happened in the past and that "it has been immersed in the Ganga river", amidst a loud round of applause.

Thackeray said people like Bachchan and Lata Mangeshkar are sent by god and cannot be restricted to any particular region as they belong to everybody.

Reciprocating warmly, Bachchan lauded the MNS Chitrapat Sena, which celebrated its seventh anniversary Monday, for taking up the cause of the people behind the scenes and standing behind them.

"Not many are aware that those behind the scenes in the making of a movie need to be recognised... And in the celluloid world, it is important that the financial future of these invisible artistes is secured," Bachchan said, rounding off his speech with a recital from his father Harivansh Rai Bachchan's poem "Agneepath".

Later, along with actor Sachin Pilgaonkar, Bachchan distributed insurance policies to junior artistes and stunt-persons who risk their lives for dangerous acts.

The insurance policies organised by the MNS Chitrapat Sena was part of the ongoing centenary celebrations of Indian cinema.

"We may have differences of opinion on various political issues, but there is no personal animosity with any individual," MNS vice president Vageesh Saraswat told IANS, explaining the significance of the event.

Barring the occasional fracas, the Bachchans have always enjoyed a close relationship with all members of the Thackeray clan from the days of the late Shiv Sena supremo Bal Thackeray.

Mandana Karimi and Radhika Apte come out in support of ...
a minute ago