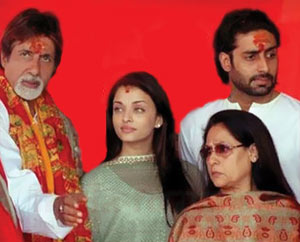 Big B’s blind faith in god is been known to everyone. Early Tuesday morning, the megastar was seen walking his way to Siddhivinayak Temple along with his son Abhisekh and bahu Aishwarya. According to our source, sporting a grey track suit, Amitabh drove from his bungalow Prateeksha to his other residence Jalsa where he was later joined by Abhishek and Aishwarya to walk towards the temple while Jaya Bachchan joined them directly at the temple. They started their marathon journey at around 2 in the morning to reach in time for the Kakad arti as Tuesday is considered "Lord Ganesha's day". Source added that the serpentine queue of devotees, who come from all over Mumbai and nearby areas, were stopped for over an hour when the Bachchan family was offering prayers
Featured Video