View Profile
Sony TV's Bade Acche Lagte Hai is gearing up for major twists in the episodes to come. Since Ram Kapoor was admitted to hospital viewers have been wondering if he will die. However the viewers can heave a sigh of relief as Ram has recently tweeted that he is not going to die. 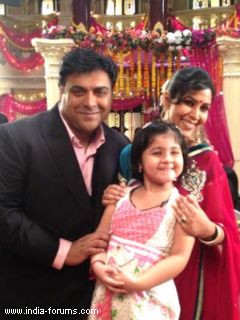 In the forthcoming episodes Ayesha (Chahatt Khanna) will be trying her best to keep Priya (Saakshi Tanwar) and Ram away from each other. Ayesha will use Priya and Rajat's (Samir Kochhar) relation which will anger Ram and create a rift between him and Priya.

Furthermore Ram will be home from hospital and Rajat, Cady, Saumya (Deepti Shrikant) will try their best to reunite Ram and Priya.

Tellybuzz called Deepti Shritkant who stated, "Yes, I have heard about it, but no clear idea".

9 years ago hope the new articles are true and Ayesha has a change of heart..

9 years ago What rift?? It will only b short lived, & Ram will soon show her , her actual place---out of RK mansion.Good riddence 2 bad rubbish!

9 years ago beta ayesha abhi ur laufing soon u will be crying!! love angry ram!!

+ 5
9 years ago wow that is quite a lot of drama... Ayesha ...she wants to be Mrs.Ram Kapoor ... for name and fame... loved Ram as Kadoos for once, reminded me of the good old Jai Walia ... but wish soon Ayesha faces his wrath for the drama she is creating ...

9 years ago oh god I cant wait for them to bring Ram and priya together! I really hope after all their tries going to vain that The one and only person that can make it happen will be only peehu!

9 years ago Ayesha is such a bad actor. It's hard to tolerate her. Wish her character is ended soon.