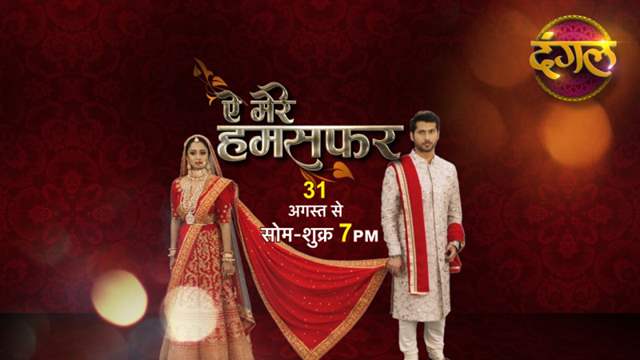 Aye Mere Humsafar, is a women-centric fictional drama that revolves around the real-life challenges that a woman undergoes while trying to pursue her professional career but due to societal norms and pressures get married and then takes up the responsibility of her family.

The show marks the return of NeeluVaghela on the television screen. The show will also witness the coming together of Namish Taneja and Neelu Vaghela. The duo who played mother-in-law and son-in-law earlier was revered by the audience for their onscreen chemistry and offscreen bond will be seen in a closer bond of a mother-son.

By far the show has completed 6 episodes managed to touch the audience hearts with its relatable storyline and unique concept. Produced by Shashi Sumeet, Aye Mere Humsafar is a complicated fiction drama set in a powerful backdrop of achieving dreams before settling down in life.

We saw how confusion arises when Pratibha Devi (Neelu Vaghela) chooses Vidhi Sharma (Tina Philip) as Ved’s(Namish Talreja) life partner while he ends up liking her sister Payal (UrfiJaved). Vidhi has a limp and has decided to dedicate her life to become an IAS officer. This being the first episode gave something to hold onto.

Chaos occurs at Vidhi’s house when Pratibha actually arrives at the wrong address in the hope to find herself a daughter in law. While it was a small twist at the beginning, it gave the audience a glimpse to expect some major interesting highpoints. Confusion galore at Janmashtami Pooja when Ved mistakes Vidhi as a decorator and starts giving her orders. After finding Vidhi to be Payal’s sister, Ved's heart flutters. Pratibha Devi misunderstands Ved’s inclination towards Payal and thinks he is interested in Vidhi.

Ved visits Payal's house, and Surajmukhi tells her to keep him busy while she and Vidhicome back. He leaves a box at Payal's house with a bracelet in it for her. These are some cute little things added in the narrative that makes the audience root for their likely couple. We see how Pratibha Devimeets Vidhi in a temple where she explains to her that she is a perfect match for Ved. Later Pratibha Devi goes to Ved’s room and finds a photo of Vidhi’s in his diary and takes it as a positive sign. On the other hand, an excited Vedshows a photo of Payal and Vidhi to Govardhan. He is completely spellbound by Payal and is lost in thoughts of marrying her.

The story has strong supporting actors such as Vaishnavi Macdonald (Surajmukhi) who plays the role of Vidhi and Payal’s mother. Vaishnavi Macdonald, who the audience is used to seeing as a rich saasuma, has given us a surprise with her marwadi dialect and has portrayed the character of a mother that connects to everyone.

The Kothari family has two sons with their wives other than Namish. Hemant Thatte who plays opposite RishinaKandhari and Achherr Bhaardwaj who plays husband to Pooja Singh. Pratibha devi has a daughter Bharti (Parvati Sehgal) who is married to Deven (ShaileshGulabani).

The story has kept us glued with its excellent writing and amazing twist. The characters have essayed their role and successfully connected with their fans in the first week. The confusion portrayed in the story may seem small now but it's definitely like the silence before the storm. We cannot wait to find out what more the story has to serve.

pyar-ishk 12 days ago This a review that shows that you actually watch the show, then IF regular copy & paste analysis

Akanksha Puri's Father Undergoes a Brain Surgery
a minute ago