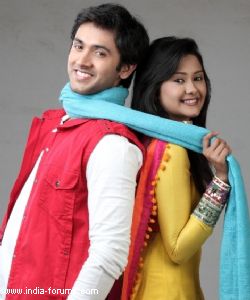 Aur Pyaar Hogaya a popular show on Zee TV is a story of two young people Avni (Kanchi Singh) and Raj (Mishkat Varma) who have different concepts about love. The love has already bloomed between this cute couple but both are still getting into small arguments.

As per the current track, marriage preparations of Aprita(Niketa Agrawal) with Avni's brother Akshat(Waseem Mushtaq) are going on.  After the engagement ceremony the story will see a sangeet ceremony, where the family member will be seen performing on famous songs from Bollywood films. Avni is a non-dancer so she has been taking training from Raj but due to some misunderstanding, she is no more learning dance moves from Raj and instead she has hired a dance teacher to learn dance for the ceremony.

Further to this our source adds, "There is an entertaining track of sangeet ceremony to come up, where all the family member will be seen enjoying themselves with dance performances. Avni's parents Bhavna Khandelwal (Reena Kapoor) and Suket Khandelwal (Rajiv Singh) will perform on the current super hit song Tune mari entry aur dil mai baji ghanti from film Gunday, while other ladies  of the family will be seen performing on the song Mara Hivda Ma nache more from film Hum Saath Saath Hain. The bride and groom Aprita and Akshat will match their footsteps on Raj Kapoor's famous song Pyaar Hua Ikraar Hua whereas there is a jugal bandi which will take place between Raj and Avni and they will be accompanied by the new cousins who have come down to Jaipur from Mumbai. There will be no drama or any twist in this track. It is just an entertaining track for the audience."

Are you guys excited to watch this entertaining dance sequence?

7 years ago Wow! So excited to watch this track! Mishkat and Kanchi are gonna kill it! Luv you Mishkat Varma &lt;3

+ 3
7 years ago so excited for this track !!!
kanchi singh and mishkat varma are goin to rockk it!!

+ 3
7 years ago omggg so excited for this track !!!
kanchi singh and mishkat varma are goin to rockk i t!!