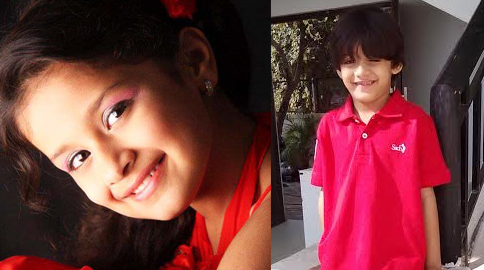 The very cute and talented kids Uzair Basar and Avneet Kaur who were earlier seen in many popular shows, will soon be seen playing pivotal roles in DJ's upcoming show Sister Didi on Sony Pal.

Uzair was last seen as Dhruv in Ek Nanad Ki Khushiyon Ki Chaabi...Meri Bhabhi on Star Plus and Avneet who was last seen as young Paakhi in Zee TV's Ek Mutthi Aasmaan has been roped in to play the son and daughter of Amrita (Pariva Pranati). Avneet is playing the character of Khushi and Uzair will be seen playing the character of Sooraj in the show.

Talking about her character, Avneet says, "She is a very sweet girl and initially, we are shown to be very rich but after the death of our father, our condition worsens. It's a very simple role and you all have to watch the show to know more about the story."

aryagr 6 years ago Dj is most stupid ph. Dont care abt viewers. I hate djs after wht they did to my fav rachana parulkar in ema. Hate u djs. Hope all ur shows goes to sink and u ll b bankrupt

.giggles. 6 years ago I don't watch that show but Congrats to Avneet!! She is a VERY talented girl:)

Dnair031 6 years ago A big no to DJ's shows after they hurt us with their decision to replace Rachana Parulkar in EMA.They don't care about their viewers opinion.Dj's are a big fat egoistic show makers.Hell with you and your shows

chahat4u 6 years ago Avneet is fabulous. I had loved her in both EMA and JDJ 6. But it is a Big NO to any DJs show. They are too good in destroying any good story, its essence; even going to the extent of ruining established and popular characters, jodis. For me they cannot handle sensitive and good stories for a long time. So, no DJ show ever now.
Besides they do not care about viewers' opinion and demand.

foram. 6 years ago I loved Avneet in EMA she was better as pakhi then shir...
but no more Djs show...
they have no respect for viewers...

DayAndNight 6 years ago Avneet is talented girl no doubts, her show meri maa was one of my fvrt, bt DJ's aftr wat they hav given in ema to viewers , i banned DJ for myself

_BleuNoir_ 6 years ago I will never watch any dj show.. they destroyed my fav serial ema n my fav jodi ragna .. so i believe in dj first but after ema heart break..i will nvr watch dj again..

roni_berna 6 years ago No more DJ shows for me. Already have experienced their EMA serial which has been worse than a nightmare. The people who do not respect their viewers, never get a place in the viewers' hearts.