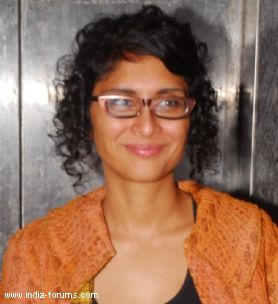 Filmmaker Kiran Rao, who released Anand Gandhi's highly acclaimed "Ship of Theseus" in association with UTV Motion Pictures, is overwhelmed with the film's National Award win. But she also feels that for the makers, the best reward is acceptance by the audience.

The makers of "Ship of Theseus" and "Shahid" threw a success party here Tuesday to celebrate the National Award win of both films.

"All filmmakers are greedy. We (filmmakers) want everything. We want box office success, critical acclaim, awards and everything else. But I think when the audience likes a film, that appreciation is far more fulfilling, far more satisfying than any award," Kiran said here Tuesday at the party.

"I think both these films - 'Ship of Theseus' and 'Shahid' - have done that. They have touched the people. That's the biggest reward you can get as a filmmaker," she added.

"Ship of Theseus", directed by Anand Gandhi, won the National Award in the Best Feature film category at the 61st National Awards. The film, which had been to the 12th Toronto International Film Festival as well, explores various aspects of life through three different characters from different walks of life.