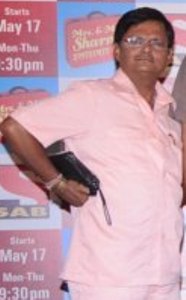 A source informs, "Atul Srivastava will essay the character called Naurangi Lal who is a watchman at V.N. Shastri's (Varun Badola) haveli. The haveli is believed to be haunted and is said that the ghost of Naurangi Lal's grandfather roams around and scares off everyone who stays in the haveli. The role of the spirit is also  donned by Atul. "

"The Shastri family encounters the ghost when they all plan for a picnic at the haveli. The ghost will try to make the family's life hell so that they leave the haveli at the earliest, but Sandhya (Shweta Gulati) saves her family with the magical powers. The shoot will start from today," adds source.

We contacted Atul Srivastava and he confirmed his presence in the show, "Yes, I will be essaying a double role in Gili GilI Gappa and I am looking forward for the shoot as we have not yet started with the shoot,"

We contacted Shoma Anand but she remained clueless about the development and she says, "I don't know about any entry in the show as I am on my way to the sets."

Atul was also seen in renowned movies like Munna Bhai M.B.B.S and many others.

Let's see how far Atul Srivastava's track reaps in TRPs for the show...

..Roopal.. 9 years ago Please shweta come back with karan wahi or amit tondon or ksg...u look so good with all of them...Love U...