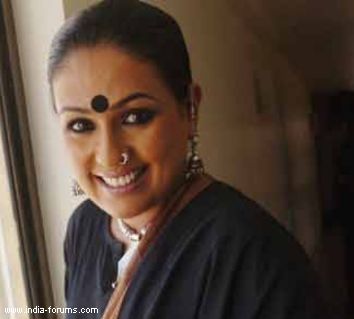 Actress Ashwini Kalsekar, who will be seen as a lady don in TV show "Afsar Bitiya", says her character is "weird" and "unpredictable".

In the show, which airs on Zee TV, she will play 40-something Sikka Thakuraine, who is carrying forward her husband's legacy of being involved in illegal activities.

She is called Sikka Thakuraine because instead of bindi she wears a sikka (coin) on her forehead. This weird obsession stems from her innate love for money, which makes her accept every possible means to earn it.

"This is not the first time I am playing a negative character but definitely the first time where I will be playing a tough yet comical don. I will be essaying the role of a quintessential village goon who is held in awe by all and sundry including the police, given her menacing reputation," Ashwini said in a statement.

"She is very weird and unpredictable. She will never call people by their first names rather refer to them as some animal of her choice. The only human side to this character is her relationship with her daughter who she dearly loves," she added.

sandiab 8 years ago Loving u in afsar bitiya and loving AB i dnt care what any1 else thinks.

Laila2009 8 years ago When new actors must be introduced to save a show with super low TRPs - characters that come out of nowhere, then this is a desperate attempt to save a show. I give this how six to eight weeks before it gets the axe. Show has 4th grade level writing for the past three months.

moniluvskinshuk 8 years ago Ashwini is a great Actress and she is rocking in AB as Sikka Thakuraien.

waise bhi the news is as usual stale now...

Pirated_Fun 8 years ago This is Ashita dhawan , not Ashwini kalsekar