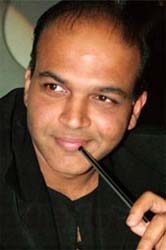 Recently Ashutosh Gowariker was in news for objections against humourous hosting. Gowariker fumed up during the Star Screen awards upon host Sajid Khan and Farah Khan's act. Well, he is once again making news for having another hosting issue. This time with host Ritesh Deshmukh and Boman Irani, who were hosting the IIFA award function held over this past weekend.


It is said that, Ritesh and Boman did a spoof on all the nominated movies, but Gowariker took objection to their act.


Ashutosh Gowariker got so angry that he angrly walked into the green room and gave both the host a lecture. Gowariker even asked the duo why they point fingers at SRK or the Bachchans, to which they reminded him of the Drona spoof and said for that Junior Bachan gave us a applause.


Well Mr. Gowariker its alright to have some humour in your life!
Featured Video