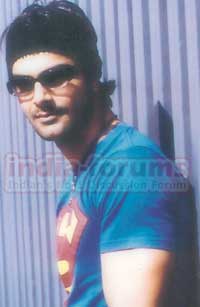 Ashmit Patel, who received critical acclaim for Pankuj Parashar's 'Banaras – A Mystic Love Story' last year, had almost disappeared from the scene. But we've found out that the actor is in fact, secretly planning an exciting comeback. And for that, he already has an interesting mix of films on floors.

His next flick Sanjiv Balath's 'The Flag' is a hard-hitting period film shot in Bhuj (incidentally, at the same locations where Aamir Khan shot for 'Lagaan'). Here, Ashmit will play a very patriotic man named Deva. He will don dhotis and the traditional Indian wear of that time.

And then, the actor has two hardcore youth-oriented films namely Ramesh Katkar's 'Toss' and Amol Shetge's 'Kabhi Kahin' up his sleeve. So watch out for this dude.

Meanwhile, one thing Ashmit is quite intrigued about is the way Shilpa Shetty has grown as an international brand, and terms the actresses' PR man Dale Bhagwagar as "Shilpa's armour, with a bullet-proof jacket".

An impressed Ashmit recently told Dale, "Whenever there is a controversy regarding her (which is quite often nowadays), you defend Shilpa tooth and nail through the media. It's a rare thing; the way you protect and guard your clients and their image. It shows how much you feel and care for them."

No wonder, ever since the publicist has heard those encouraging words, he's been raving about Ashmit to all and sundry, as if the two had formed a mutual admiration society.