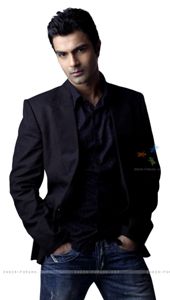 Ashmit Patel who created all noise by being part of COLORS' Bigg Boss 4 is back for his second innings on television. This time, he will be seen as the host of UTV Bindass' new reality show Super Stud.

A source informs, "UTV Bindass is coming up with a reality show named 'Super Stud', produced by Vishal Mull who has produced Date Trap for UTV Bindass and Indian Idol on Sony TV. The shoot for the reality has not started and is slotted to go on air by April end".

Talking about the concept of the reality show a source states, "The contestants will have to prove that they are the ultimate Casanova by passing all the tasks given".

A source from the channel confirms, "Yes, UTV Bindass and Vishal Mull are once again coming up with a unique reality concept which will be hosted by Ashmit Patel".

We tried hard to get in touch with Vishal Mull but our efforts were in vain!

9 years ago he is such a *****
in bb4....
n for a single reason dat sara has taken veenas name in elimination kitna gussa hogaya tha i just hate ashmit n veena no one cares go to helllllllllll

9 years ago no doubt ashmit is hosting it,the way he portrayed himself in bigg boss4 flirting with sara,aanchal,veena ,im sure he himself is a big casanova!!

+ 3
9 years ago Don't tell me that guys would like to prove themselves casanovas and spoil their images just to win some money??? Cos I feel, being branded a casanova is in no way, a matter of pride.

11 years ago wow! can''t wait for this movie! i think that they will look cute together!

11 years ago wow! this is going to be such a cool jodi!!! love them both, how cute would they look!

+ 2
11 years ago Finally Shahid will get some younger looking actresses....except Amrita Rao all other actresses looked old in comparison. Good luck cutie Shahid.