There are a few in the industry who have tried hands on direction, DOP and production. Nikhil Sinha is one such person who has tried as well as succeeded in all these streams.
After directing shows like Jhansi Ki Rani, Ramayan and Hatim to name a few, Nikhil has put himself into the shoes of a Producer under the banner of Triangle Productions, through Imagine TV's show Baba Aiso Varr Dhundo. The show tells about the difficulties faced by a dwarf girl and her family. 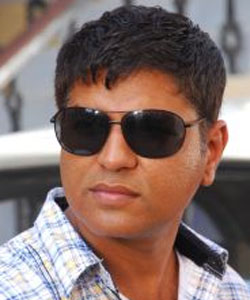 Tellybuzz had a chat with this talented person about his journey.

What made you take up the role of a Producer and how is the experience?
The experience has been great as a Producer because I have been in the industry for long as a director and felt it was time for me to do production also. In direction you have a say in the creative aspects and not on the others like story and the script. But now I am happy to be a producer but at the same time since the production house is new there are challenges because the show is launched on a large scale and also the production house has to be set at the same time.
How was the journey from director to a producer?
I did not realize the transformation from director to producer because it just happened and it has been thirteen years for me in the industry in Mumbai and it has always kept me busy and things were just happening all the time. And one and a half years back I realized that it has been long that I am doing shows for others and it was time for me to do something for myself.
You are co-producing Baba with Raakesh Paswan, who is a writer turned producer, how is the experience working with him?
We have a positive collaboration and a good rapport with each other and the experience working with him is very nice. We divide the work amongst each other where, Raakesh looks after the story line and I take care of the creative aspects which we later on sit together and discuss the rights and wrongs of the show. The work is mutual and the ambiance is very well balanced.
Juhi Aslam is a new and a different face in the television industry, what was the procedure of her selection?
Selection for the lead cast for the show was an important task because we wanted a dwarf girl to do the lead role. We did a lot of hunting because the character demanded a girl who is presentable with an innocent look and Juhi fit into it very well. Juhi is from Shikohabad (near Agra) and has completed her BSc. She is a very intelligent girl and we are really happy with her performance as delivering her maximum because she could feel and live in the character.

You have done shows of variant concepts; daily soaps like Saat Phere, mythos like Prithviraj Chauhan, and other shows like Lucky and Hotel Kingston, what is your favourite genre and why?
My favourite genre is mythic because as a director you have a lot of scope to play and you take up the real role as a director. In daily soaps you are given a story after which you are told what to do. But in historical shows you take up the role of the production designer as well as the director.
You have taken roles of a director; camera person and now a producer, which role do you enjoy the most being?
I like the role of the producer because I have the entire hold on the show and if I want to take the crew to different locations then I can do that depending on the demand of the show.
Today the culture of TRP is the decision making aspect for the success of a show, do you think that is affecting the quality that is delivered?
TRP is indeed the deciding factor for the show to be successful. Within these ten years of my career there have been a lot of changes in the industry as it is moving according to the trend. Today there is a lot of competition which did not exist during the earlier times, because of which the concept of the show is getting affected. Today the concept of the show is  changed as soon as you realize the show is not doing well. But when a show is launched, it is obvious that people will need some time to get into the story of the show and for that patience is an important thing. TRPs are affecting the show in some way or the other as there is an intense competition to bag the number 1 position in the channel and TV.
A few years back, television screens were filled with shows of Saas Bahu drama, but today the shows are of various concepts, how has that affected the industry?
There were different concepts in every period of time. There has been Saas Bahu drama for a certain period of time and the audiences were glued into that but as time changes they need different shows and now people demand certain kind of shows and some time in future this trend might also change.
How has the audience reception changed with time?
Audience accepts whatever that is shown to them because they have no other option. When DD started off with shows like Chanakya, Ramayan, Fauji and so on people used to watch it and accept it. But then there was also a matter of Monopoly there. But the shows were intelligent and even though the literacy rate then was low people used to watch and accept the show. But now the audience is more intelligent and we cannot play with their choices.
If ever you want to redo one of your previous shows which one would that be and why?
I would love to do Hatim again with more creative inputs because the show was accepted on a very huge scale and has made a mark among people.

You are doing a movie too; can you tell us something about it?
The movie that I am working on is called 'Alha Udal'. The movie has a historical background wherein Alha and Udal are two warriors who were prominent in the early years of Madhya Pradesh and Uttar Pradesh. The movie has Gagan Kang and Ashish Sharma portraying the roles of Alha and Udal. Production is Sagar Pictures and the movie is especially made for Star Gold.

It is a common phrase that behind every successful man, there is a woman; how true is this phrase in your life?
It is very much true in my case, because my wife has been very supportive. It has been three years since we are married but we were seeing each other two years before we got married. I used to travel a lot for shoots and other work and she has always been my guiding force. She has helped me in shaping up my career and sometimes gives advices too.

Haridas 5 years ago Ashish Shaarma hope to see you soon on TV..

PrashT 9 years ago thnx fr the news....
looking frward to the moviee

btw gurpz...me needs to have a lil talk with you :P

MrsKaranGrover 11 years ago Awwwwwww thats so cute lol...bless all these jodi lol..