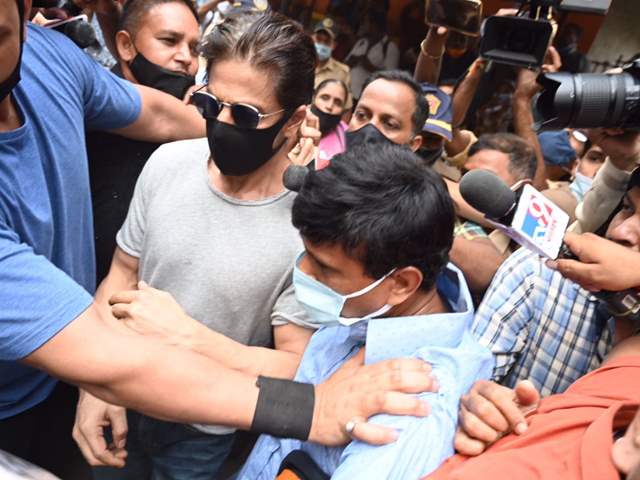 Shah Rukh Khan paid a visit to son Aryan Khan in jail on Thursday morning, and the superstar was seen in public for the first time since his son was arrested by the Narcotics Control Bureau on October 3.

All the COVID-19 protocols for in-person meetings in jail were lifted, allowing SRK to meet with his son. According to India Today, Shah Rukh Khan spent nearly 18 minutes with Aryan, and they communicated through an intercom in the presence of jail officials. According to the report, Aryan Khan was visibly emotional during the meeting.

The Bombay High Court will hear Aryan Khan's bail application on October 26. Satish Maneshinde, Aryan's lawyer, requested a hearing on Friday or Monday, but NCB ASG Anil Singh stated that they had not yet been served with the copy. In addition, the Court denied Maneshinde's request for a video conferencing hearing, and Aryan's bail plea was scheduled for hearing on Tuesday.

On October 20, a special NDPS court denied Aryan Khan's bail request, prompting the star's son's legal team to file an appeal with the Supreme Court. Aryan is currently being held at the Arthur Road Jail along with several other defendants in the drugs-on-cruise case. In response to Aryan's bail application, Sameer Wankhede, zonal director of NCB's Mumbai unit, stated, 'Satyamev Jayate.'

Aryan Khan has been detained at the Arthur Road Jail for over two weeks after being arrested on October 3. On October 11, Shah Rukh Khan sent Rs 4,500 to the prison via money order to cover his son's canteen expenses.

For the first time in 12 days, Aryan Khan was able to speak with Shah Rukh and Gauri Khan last week. He was permitted to make a video call to his parents, a service introduced by jail officials during the pandemic last year to allow inmates to communicate with their families and lawyers. "Aryan gave his mother’s number. He spoke to his mother and father through the video call facility for 10 minutes,” a senior jail official confirmed to TOI.