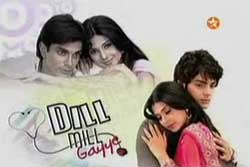 Star One's Dill Mill Gaye, produced by Cinevistaas had recently taken the Dostana route which saw some great friendship emerging between Armaan (Karan Singh Grover) and Sid (Karan Wahi). The bond between the two lads is only getting stronger as Armaan continues to play cupid in the lives of Sid and Riddhima (Jennifer Winget).

After the 'Uff Teri Ada' seductive performance coming from a drunken Riddhima, the next step of Armaan is to use a '6 din ladki IN' concept followed by SRK in the movie Kal Ho Na Ho.

According to our source, "Armaan has not been able to let go of Riddhima; however he understands the fact that she being a typical Indian wife has to lead a happy life with Sid. With much difficulty, Armaan is trying his best to play cupid to the married couple. He will now advise Sid by giving him tips to get back his love. His formula will help Sid in getting the girl in the next six days. This will again be a light track wherein he will educate Sid with tips daily, which will start with Sid ignoring Riddhima on the first day, then he will start liking what she likes and so on and so forth".

9 years ago Karan singh Grover u r a rokkstar.