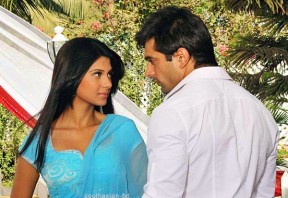 The Cinevistaas show will have a tailor-made happy ending and with it comes the much-awaited union of the protagonists, Armaan (Karan Singh Grover) and Ridhima (Jennifer Winget).

Our source from the sets tells us, "Armaan and Riddhima have a big scene in the finale episode where they unite. All this happens in the basket ball court, which has always been the place where they have fought, patched up and cared for each other. But the big high point will be when Shashank (Mohnish Behl) finally gives his consent and acknowledges Armaan as the Best man for his daughter. He is the one who requests Armaan to go and have a talk with Riddhima and convince her for marriage".

While Armaan has been shown as the sincere lover for the past many years, it is Riddhima who gets to propose for the final time!!

Our source states, "Unlike the typical ending where the boy kneels down and proposes to his girl, it is Riddhima who gives Armaan a pleasant surprise by proposing to him in style".

We tried calling Jennifer Winget but she remained unavailable.

While we bid adieu to the most popular Jodi and show, TellyBuzz hopes that the makers get back to entice viewers with a Season 3!!

8 years ago Still waiting for DMG 3 ...with Dr Shashank definitely in it ...no Sanjeevani without him !

ArKaJenFan 9 years ago KaJen are the most hottest & talented pair. They need ti be top 3 & in DMG new season.

9 years ago Missing dmg & kajen. Plz come with dmg 3 for ur fan sake.